The number of residential property sales in Metro Vancouver from December to February were 3093, 2389 and 3727 respectively. These numbers are significantly more than the number of sales at the same time last year, however, the amount of active listings remains the same. This suggests that the demand for residential property is higher than it has been previously, despite the pandemic. In fact, current data suggests that the pandemic has served to increase the demand for property while the supply struggles to keep up.

According to an article by Ethan Sawyer of the Canadian Broadcasting Corporation (CBC) the increase in property sales during the start of the year can be partially attributed to increased savings and a desire for more space; both of which have come about due to working at home during this pandemic. It has also been noted that the large increase in sales has been largely driven by local rather than speculative sales. This strong demand for residential property has also lead to a significantly higher sales-to-active listings ratio than the previous year as illustrated in the chart below.

For all property types, the sales-to-active listings ratio for February 2021 is 44.6 per cent. By property type, the ratio is 41.8 per cent for detached homes, 61.8 per cent for townhomes, and 41.7 per cent for apartments. The ratio for December and January were 37% and 29% respectively. This again shows a market with high demand but a supply that is not increasing. Generally, analysts say downward pressure on home prices occurs when the ratio dips below 12 per cent for a sustained period, while home prices often experience upward pressure when it surpasses 20 per cent over several months. As the ratio has been above 20% for the entire quarter we are still in a seller's market.

The increase in home prices is most likely due to the same conditions as previously described. Buyers are largely motivated by a desire to live in different accommodations with some remaining in the same general area and others looking to relocate. Having spent so much of 2020 at home during the pandemic, many simply want a change, while others are making a shift to quarters that will better accommodate a home office or better suit a family spending more time at home. This desire for space combined with low interest rates, increased savings and a large influx of first-time buyers has created a strong seller's market during the first quarter of 2021.

Commercial Sales in Position to Rebound in 2021

Vancouver's commercial real estate market, particularly its office segment, is well-positioned to capitalize on the economic recovery anticipated to take place during the second half of 2021. The city’s commercial vacancy grew from 4.4% during year-end 2019 to 7.5% by year-end 2020. However, regional vacancy remained comparatively tight and was still less than the record 8% established at year-end 2017. Regional vacancy is still expected to rise during 2021, but a balanced market should follow. Renewed optimism accompanied by a widely forecasted resumption in economic activity is anticipated to accelerate a return to office by workers and stimulate real estate decision-makers to action.

This potential for a rebound is shown by the BCREA Commercial Leading Indicator (CLI) reaching a new high since the start of the series in 1999. The CLI rose from 139 to 144 in the fourth quarter of 2020, representing the second consecutive increase after four consecutive quarterly declines. Compared to the same time last year, the index was up by 5 per cent 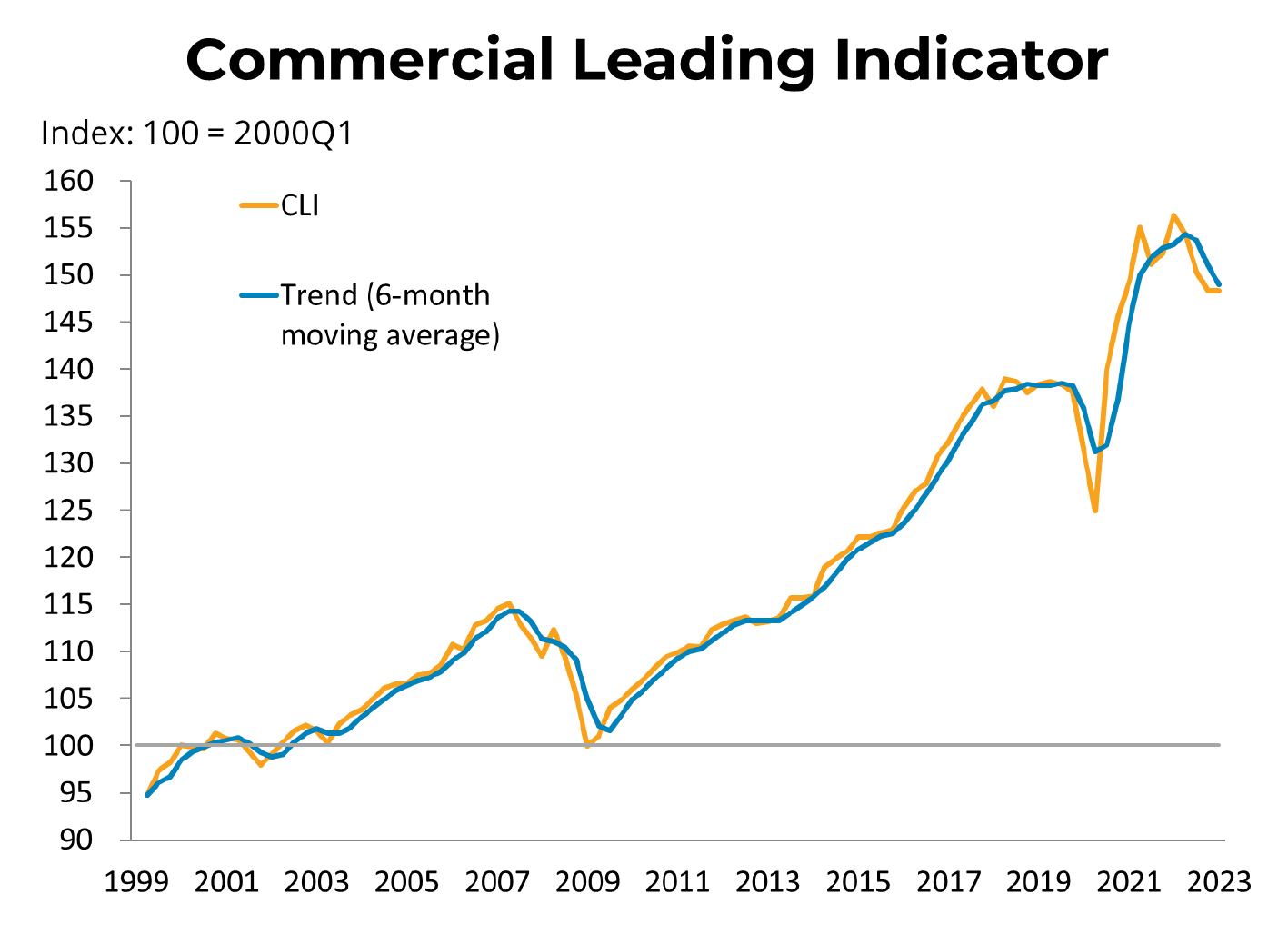 
Although the CLI is responding to a sharp rebound in economic, financial and employment conditions, there is more here than meets the eye. The observed growth should result in an increased demand for commercial and office space. However, due to the obvious setbacks of the pandemic this increased demand has not materialized. Currently, there is a gap between what is expected from the data and what is currently happening in the market.

Employment growth in key commercial real estate sectors such as finance, insurance, real estate  and leasing increased by about 10,400 jobs in the fourth quarter. Combined with employment growth in the previous quarter, this resulted in a full recovery of job losses in the mentioned sectors from the first half of 2020. Manufacturing employment was also up by about 5,700 jobs in the fourth quarter. Employment growth in this sector in the second half of 2020 nearly made up for all losses in the previous four quarters. The CLI’s financial component was positive in the fourth quarter of 2020, as REIT prices rose and risk spreads fell, and investors gained confidence in the recovery of the global economy following widespread rollouts of the COVID-19 vaccine. All of these conditions are setting up the Vancouver commercial real estate market for a strong rebound in the later stages of 2021.

Four Trends Unique to Today's Market from the REBGV

Realtors must follow cleaning and occupancy protocols that could limit the number of showings they can conduct in a day. Many Realtors are using technologies like live-streaming, video tours, “dollhouse” or 3D renderings, and even virtual reality to help buyers see the interior of a home listed for sale. For buyers, these tools are a great way to visualize space and narrow down potential homes. Make sure to take advantage of them to do your due diligence before requesting an in-person showing. For sellers, these tools offer a way to market your home to a wider audience. They’ll also help weed out unserious buyers who might just be seeing what’s out there.

A low supply of homes coupled with unseasonably high demand creates competition between buyers. In today’s market, multiple offer situations are becoming more prevalent, which means if you’re buying a home, you’ll likely be competing with quite a few other potential buyers. For buyers, it’s more important than ever to talk to your Realtor and get their advice on setting realistic expectations on what you’re willing to pay for your new home. A good adage to remember in a multiple offer presentation is, “you rarely get a second chance to make a good first impression.” Meaning, consider making the best offer you can afford first, since the seller may choose to deal first with other, higher offers before considering yours.

The end of the pandemic is in sight, but safety protocols are still in effect. This could mean travelling separately to showings, wearing masks and setting strict limits on the number of people viewing a home.

The busy market has resulted in significantly shorter timelines to sell. For buyers, this means you’ll have less time to do your due diligence. Lining up a home inspector, setting a budget, finding the right professionals, and getting your mortgage pre-approved can help you move faster when the time comes to make an offer on a home.

Canadian mortgage rates are beginning to inch higher for the first time since before the COVID-19 crisis, reflecting the spike in long-term bond yields, but with home loans still languishing around historically low levels the modest hike is unlikely to slow the red-hot housing market. The lowest rate for a Canadian five-year fixed rate mortgage, the most common mortgage in Canada, climbed by 25 basis points last week to 1.64 per cent, according to Ratehub.ca. It was the first increase since January 2020. The move could encourage buyers to lock in historically low borrowing costs before they rise further.

Mortgage rates had been trending lower in Canada since the Bank of Canada slashed its benchmark interest rate last March to a record low of 0.25 per cent to support the economy during the pandemic. So the move-up in mortgage rates is a sea change for home buyers, providing a sense that a bottom could be in place.

A new report on housing shows rental prices have dropped in Vancouver year over year in late 2020, but the city topped the country when it came to high prices. The average price for a one-bedroom unit in Vancouver in December was $1,855 per month, which is a drop of 4.4 per cent from 2019. Two-bedroom units averaged $2,635, which is down nine per cent year over year.

In spite of the decrease, Vancouver had the highest average monthly rent of 35 cities listed in the report. It was the first time Toronto hasn't topped the list.
Other Metro Vancouver cities on the list included: